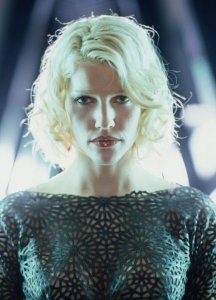 Finally: Nr-6 in BattleStar Gallactica (Tricia Hefer) appeared in the PlayBoy Magazine. The popular Sci-Fi series has awesome girls in it. Next to Tricia we have Grace Park (Sharon / Boomer)Â or what aboutÂ Katee Sackhoff (Kara ThraceÂ / Starbuck)Â appearing in BattleStar Gallactica. So find here Tricia helfer invading the Playboy Magazine nude (more or less topless).

“Heroes has delivered exceptional ratings since its premiere, and we’re even more impressed with the quality of the upcoming episodes,” said NBC TV president Kevin Reilly. “The best is yet to come over the course of a full season with this newest drama sensation.”

One gray cloud for Heroes: Appliance maker Emerson Electrics is suing NBC for using its product without authorization in a scene from the show’s pilot. The scene depicts teen cheerleader Hayden Panettiere (Claire Bennet) accidentally sticking her hand into the In-Sink-Erator, only to find the mangled appendage quickly repairing itself.

Emerson wants NBC to stop airing the scene in repeats and in syndication. (Oh oh .. A removed DVD scene laterÂ ???)