ugh .. after 452 days my home server had to be shut-down this morning. We got a new meter in our transformer substation. Yeah I have an UPS, but the guy could not tell how much time he needed to have the main power shut down .. a nice uptime for my BlueQuartz server which will be shutdown forevery maybe soon (or I will hook it up in my work office so that we have a nice running server available there). 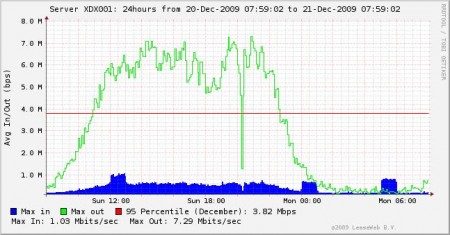 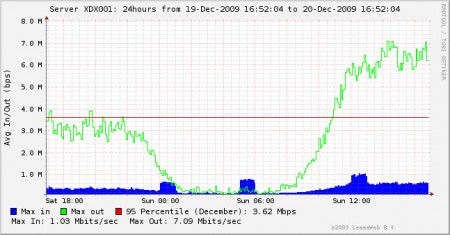 just updated the server to Centos 5.2 and made sure that all Plesk errors were solved. Little issue with the MySQL server but that was also quickly solved. Phew .. back to watching some TV series ..

I like to get feedback when I ask for it, but when feedback is given many people do lack to give good information.
it’s fine telling me that something is wrong, but how you test is not written or badly described.  That is a missed opportunity.
So some persons reported that the UPnP AV server of the 1.05b3 firmware for CH3SNAS is not running. Ok I can accept that. Knowing that it was tested by one of my engineers. Of course he could have made a mistake .. but he was instructed ;-)

So I awoke on the sunday, finised the preparation of soup of asparagus and after that on my free Sunday I took my development CH3SNAS which is only running fun_plug to get telnet.
Some weeks ago I tested for someone something else so my version is:

Above version was revoked due to non working FTP Server.
I uploaded a fresh folder with MP3 music

in telnet I gave the command: ps
to see if everything was running and refreshed on the fly. With the CFULLHDMA I accessed the CH3SNAS UPnP Server and I played on of the music files. Everything ok

Than I upgraded to:

And just rebooted the device: Hey .. indeed no UPnP Server running anymore only some prescan and inotify stuff but the actual UPnP Server no go .. mmm someone in the comments was actually right Damn ..

Let me try to start it manually through telnet:

Ok than I took my magic fingers, and at the backside I pressed the reset button (hell yeah, the BACK-SIDE and not the webinterface factory reset, cause that one does not do an actual forced hard reset. (to be sure 100% cause that thing is not placed there for nothing).

Restarted the CH3SNAS again and watched the magic happen.

Wow .. my magic fingers worked .. and I am again playing another CD I uploaded to the device

Shoot. My UPnP Server is running. Now yours is on!

UPDATE 18.42H After a reboot I can reproduce issue like reported by 2 users. I will do some more testings tomorrow. (it seems that you should not reboot the device after factory defaults (sigh)). that’s not ok

Oeps. Today I noticed that the server was not working anymore. Damn. No space on HDD left. (stupid Backups!)

SSH saved the day and everything is working again .. Good lesson!

Server was offline for a couple of hours. No Idea what was causing the lock down. Bandwidth stat showed some wierd behaviour. I’m now checking stuff.

Ah .. reason found .. the reason why your server was offline: the APC connector was loose .. Duhhhhhhh