This posts is merely an overview of what I did to get my WLAN guests, who access the Internet through the hotspot feature of the USG and the Unifi controller,through a VLAN so that they are not part of my own private network. (security)

This handout only applies when you own some gear of Ubiquity. (I have also other hardware, here you might have to make some configuration as well, my situation is explained.

1st Create a guest network with VLAN100. Do this only if you have the USG. If you do not have an USG this does not apply cause the network part in the controller is for use with the Unifi USG router.

If you use “Guest” it is already isolated from your corporate LAN.
Modify other settings like DHCP in this menu. This I do not explain.

This is the most important part.

Notice: I have an US-8-150W. When creating a VLAN Guest network in the profiles part of the controller the ports will be configured automatically. As long as you have all profiles accepted on the ports, the VLAN will directly work if your AccessPoint is directly connected to the Unifi Switch.

To have the VLAN100 working towards the other APs you need to tag the ports in other smart swiches. In my situation 2 different TP-Link devices 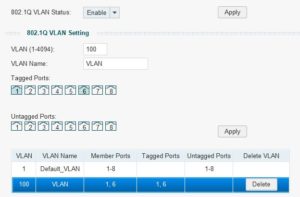 Here you see the VLAN section of the SG2216 where I tagged port 16 (uplink port towards the Unifi Switch) and port 10 connected to the AccessPoint. Now this AccessPoint is also serving VLAN towards my Guests.

Maybe you wonder what will happen to your normal LAN clients when you enable or tag ports on VLAN100: your normal LAN is not tagged and the switches will forward your data normally.

I have added extra options to the SMB configuration of Openmediavault

I am getting (its wierd) more satisfied, now the Wireless is stable and I do random tests

First of all I was testing PC Windows 10 –> Debian Linux, so a write action, my rant was about the write speed. But actually I think I cannot be complaining a lot when I achieve 20 to 30MB/s  write speed .. ? can I?

Today I tested a read speed from NAS (Debian with OMV, (OpenMediaVault)) and here I get speeds between 40 and 45MB/s ..  so .. although I would like to have faster write speeds, the read speed is showing expected speeds.. .

First of all .. I am geek, like to test, read manuals (not user manuals but engineer manuals or technical manuals) to find and read about settings to see how they can be finetuned for optimal results.

Maybe it’s due to myself, but why is there not a decent manual for the DWA-192? settings explained? best settings used … documentation is dramatic.

Last week I bought a DWA-192. It’s being used in The Netherlands under Windows 10 and I am testing towards a HP Microserver running VMWARE with a host running Debian 8. Normal speeds on Gigabit copper wire are around 78 to 80MB/s

update (one day later): due to just wait .. and maybe time of test I see better results. Speed is improved towards 250 to 300 mbit/s

My AP environment consists of 3 APS’s

Dear D-Link, please request your engineers at Alpha Networks that they will contact Realtek to see how interoperability between AP’s can be improved. I really like to help to test, things I did many years.

There are a few things:

Of course specific settings like using VHT80 etc are set otherwise the connection speed could not achieve 1.1 or 1.3Gbit/s

So how to achieve a higher throughput speed, something I am seeking.

b.t.w. Altough speed is not everything, the wireless is absolutely stable !